In a city like Vancouver, where rain falls with the heavy condemnation of an Old Testament morality tale, coffee is an absolute necessity.  The best strategy to combat the dreary morning skies is with the bitter-rich aroma & mind-rousing taste of a well-prepared cup of Joseph.

Now I’m not referring to those fancy-pants frappa-cappu-mocha-latta-ccinos or whatever caffeinated beverage is currently trending Robson.  In the morning, I want a coffee I can taste.  One that hugs my tongue & warms my chest, stains my ties and burns my mouth, the kind of drink that hangs on my breath the entire morning & propels me into a jittery frenzy till the late afternoon.  When I say “coffee,” I’m talking about the almighty Americano…

Of all the fine java peddlers in town, one of the best Americanos is served on 1st & Commercial at Café Calabria.  Sitting right beside the painfully delicious La Grotta Del Formaggio, Calabria is a family run Italian style café: gelato, Paninis, biscotti, frescos covering the walls with Roman statues looking on approvingly.  The baristas make Americanos with top marks in the look, smell & taste departments.  Their Americanos have so much crema, you’ll think you were mistakenly given an espresso cup full of freshly poured Guinness.  The first time I went there, I had two.  The raspy voiced paisan behind the counter didn’t even need to hear my order – he knew…

Now that I’ve given their due praise, I must insert the disclaimer that not all have positive experiences with Calabria; art comes at a price.  Just as the misunderstood genius of the Soup Nazi tested patrons with his stringent house rules, so does Calabria, at times, butt heads with libertarian, customer-comes-first visitors.  Don’t ever bring outside food into Calabria.  If you want to sit down, order first, and whatever you do, DO NOT buy one of the knee-buckling sandwiches from La Grotta Del Formaggio & try to eat it on Calabria ground.  Know that going in, and you’ll be fine, just don’t tell the man behind the counter he looks like Al Pacino… “whoo-ahhhh, whoo-ahhhh…” 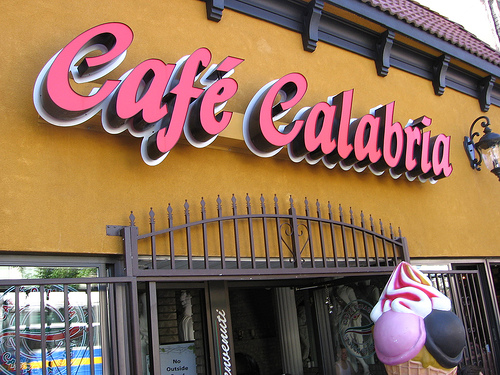